Home Top 100 Paintings Two Sisters (on the terrace) by Renoir 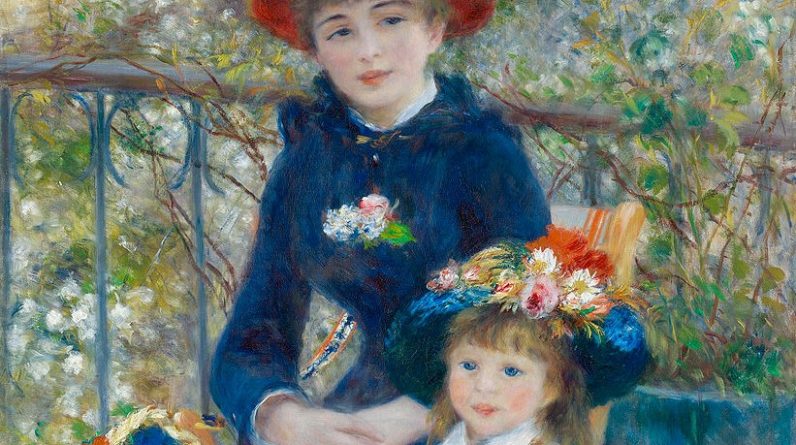 The name of the painting can be broken into two parts and can be assigned two different origins; the first part of the denomination that is “Two sisters” was given by the artist, Pierre Auguste Renoir himself and the other title, “On the Terrace” was constructed by Paul Durand-Ruel, the very first owner of the painting. In the painting, the glaring innocence of the two sisters sitting side by side on the terrace strikes the right chords in the viewer’s heart and the flavor of the French culture that is depicted in their attires and the surroundings. In the bits below, we will take a deeper look into this creation so that the readers have a transparent knowledge about it before they purchase it.

Table of Contents hide
1 The scene portrayed
2 It’s significance
3 Why should it make it to your collection?

The day shown in the painting is just another usual, bright and enchanting day in the city where two sisters who seem to have a considerable age gap are seen gazing towards two different directions with a slight grin on their faces. The interesting part here is that the two girls depicted were not real sisters but only two models for the artist. The elder sister has donned a hat and a blue dress and looking subtly towards her left with keen eyes and the younger one with her bright blue eyes is looking straight with a basket of flowers in her hands. The period of the painting is relative during the season of spring with the flowers in the backdrop in full bloom and the sky clear. 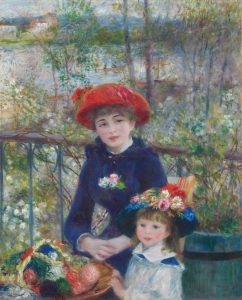 Coming to the second portion of the name “On the Terrace” is popular for its impressionistic approach towards the painting; the brushstrokes are sharp and blurred with other colors in some portions. For the impressionists, everything depicted on the canvas needed to have a connection to real-life while preserving the essence of fictional art. Therefore, their techniques of painting were different from; any color, when absorbs some light, tends to change its shade, keeping this in mind, even when the painter wanted solid colors on the picture, he made sure that it was mixed with a few lighter shades so that the illusion was successfully held up. The day and moment captured is nothing extravagant keeping up with the theme of realism and is devoid of any influence from the agitating social and political facets.

Why should it make it to your collection?

Unlike the common themes that were taken up by artists during this time, Renoir decided to differ. He created something that did not have any solid factors of historical or political significance that concerned the stalwarts of the country but decided to turn to the common man and realistically portray the daily chores that are carried out on a normal day of a middle-class family. A painting like “Two Sisters (On the Terrace)” will be a source of peace, joy, and tranquility in your house every time you look at it. Such life-like portrayals create a common platform for all the people in the society to draw conclusions and relate to all the intricate details. Paintings are meant to spread positivity and a message of unity amongst its viewers and the paintings alike “Two Sisters (On the Terrace)” capitalizes on this exact notion and is guaranteed to brighten up and intensify the appeal of the house when added in your collection.