The significance and the story behind the painting ‘Tree of Life’ by Klimt is as engrossing as its denomination. The existence of the tree of life dates long back to the period when the Bible was formulated and was being held as a spiritual and religious symbol in existence. The tree of life has been placed in the Garden of Eden and it bore the forbidden fruit whose consumption led to the fall of mankind forever. This painting by Gustav Klimt is the product of a direct influence of this belief and can be considered as one of the best representations of the subject that has been handled by so many artists from all different ages.

Table of Contents hide
1 The depiction in the painting
2 The symbolic significance
3 Why should you have it at home?

The depiction in the painting

If one looks closely at the portrayal by Klimt, he will find that the Tree of Life is the primary subject; all the other objects placed alongside have been employed to enhance the significance of the tree. The tree has been shown as a common link between the three worlds that essentially rule a man’s life; two of them are considered to be the residents of the immortals depending upon their deeds in the lifetime, that is the “Underground” or Hell and the “Heavens”, the other is the land of the mortals, which is the Earth. The tree has its roots below the earth that symbolizes that man rises from soil and is buried into it eventually after death and therefore is the same soil that supports the growth and nourishment of the tree during its first stages of life, the tree attains development while on earth and it spreads its branches with fruits and flowers in the backdrop of the sky signifying heaven that also stands for the unending streak of possibilities of growth in life. 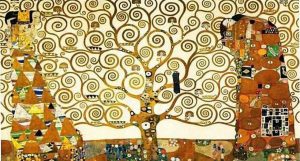 As already mentioned before, ‘Tree of life’ that takes up space from all three worlds surrounding man has been depicted as inevitable in man’s cycle of life. On one of the branches of the tree, a black bird is sitting peacefully without any sign of flight. This means that no matter how sparkling your life has been, the only reality that has is death and that you will have to encounter it unarmed. In some cultures, the tree has also been interpreted as the virtues that a man experiences through his lifetime; the strong roots are his bindings to home, the branches are his endeavors to fulfill his dreams and the fruits stand for the result borne by his hard work and dedication.

Why should you have it at home?

Enthusiasts who admire art with all their heart and soul and the group of people who see art as a Midas touch will agree that the “Tree of Life’ is a work that wears the badge of aesthetic sophistication all over it. From the subtle mixture of colors to the unconventional patterns that have been used to formulate the tree are unsurpassed. Paintings like these deserve to be portrayed in large frames and are suitable to be hanged in any corner of the house. Every time you throw a glance at it, you will be reminded how crucial it is to stay true to your roots however strong the branches of your life are; once they face a tumultuous experience, it will be enough to shake every bit of your life. Besides, according to the laws of Feng-Shui, having a spiritual painting in your home increases the chances of receiving wellbeing and prosperity in abundance.