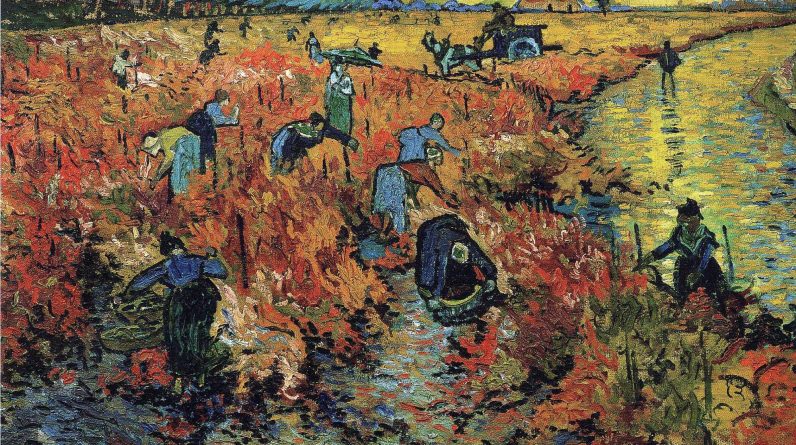 “Ah well, I have to go to work

in the vineyard, near Mont Majour.

It’s all purplish yellow green under the blue sky,

These lines have been taken from the letter that Vincent Van Gogh wrote to Eugene Boch on October 2, 1888, speaking about his intention to bring the vision of a vineyard into life. The brilliant Dutch painter made an array of ingenious paintings throughout his life, but in his prime time as an artist, he could never garner the recognition that is being addressed to him today. It is commonly known that amongst all the paintings that he ever created, he only sold one, and that was The Red Vineyard! In the section below, we will take through some more details regarding the “Red Vineyard” and explore why it is being as one of his Van Gogh’s masterpieces.

The setting of the painting is that of the vine harvest being initiated in Arles, a district in Southern France. As mentioned in his letter, on the top left corner of the painting there is a hint of the sky turned yellow because of the blazing sun shining with its entire caliber. The reflection of the sunrays is wholly absorbed by the vineyard and the river flowing alongside turning it into a golden landscape. The picture portrayed is that of time during the dusk when the slanting rays of the sun turn red and paint everything that it finds in its vicinity with the same color. The vineyard is populated with quite some number of field workers who are employed in gathering vine before the sun goes down. If noticed carefully, one will find a network of diagonal lines in the piece that have been intentionally placed by the artist to ensure that the sight of the viewer moves along a disciplined direction; that is, from the topmost corner of the sun and then to the vineyard.

Significance of the painting

Vincent Van Gogh was a fan of creating paintings that were directly influenced by his memory concerning a particular thought or scenery; similarly, in case of the “Red Vineyards” Gogh brought into life the plight of the poorer sections of the society who had to work through all day to earn their meals. This was common amongst people of the 19th century, as illustrated in the painting, the people are working even during the oncoming of dusk which symbolizes that they have had a long and tiring day. The only positive aspect and comfort that they had access to were the bounties of nature that gradually changed colors signifying the nightfall and the consort of cool breeze. 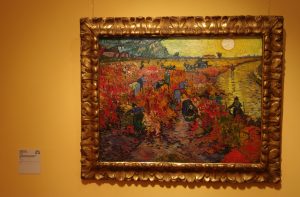 Reasons to own it

In the modern era, man has lost his predominating touch with nature that previously was considered to be the only consoler of a frail body and mind that was a repercussion of laboring throughout the day. Through the “Red Vineyards”, Van Gogh attempts in creating a bridge that will assist man in returning to nature. Every time you cast a look upon the painting placed in your house, you will be able to feel the natural meadows and vineyards even when you are restricted within the four walls of your room. Additionally, paintings like these come with a charm of its own; because it employs several objects from nature the painting is one whole in itself thereby fitting in multiple purposes. Owning this leads to a win-win situation; you invest in only one artifact for one entire room and at the same time you have the privilege of possessing a world-famous classic that is bound to draw everybody’s attention towards itself.