Home Masterpiece Stories The Story Behind The Kramer Painting 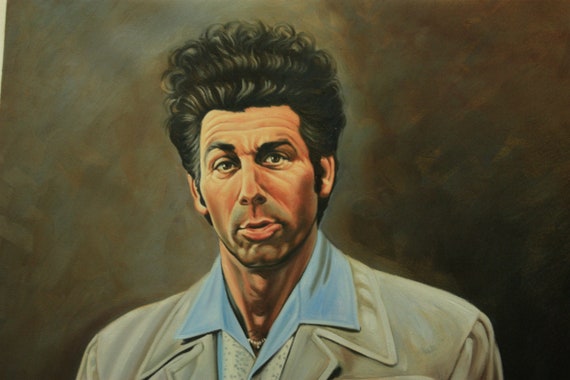 You might be aware of the fact that the 38th episode of Seinfeld was very famous among all viewers. That episode was named as The Letter, and the main reason behind its incredible popularity was the appearance of Kramer painting. That episode came on TV for the first time on 25th March 1992, and today it has been more than 20 years since we watched Seinfeld on TV. However, many of you might be still curious to know what happened to that painting shown in the 38th episode.

The famous painting in Seinfeld episode:

In that famous episode of Seinfeld, Kramer was forced to stand still so that his painting can be drawn. A couple came to the art gallery and saw that painting without knowing that who Kramer was in actual. Probably it was the best one-line description given by someone about Kramer’s painting. And it also became the most popular dialogue of that film.

It is important to mention that this painting has been reproduced thousands of times by different artists. However, the real name of the artist who painted that picture is still unknown. It was just because that painting was not signed, and it appears to be a creation of some mysterious artist. People are still curious to know the name of that talented artist who painted that masterpiece, but it seems that this mystery cannot be solved now. 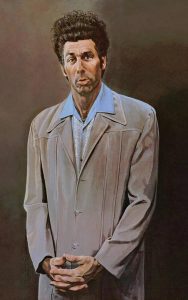 When the show got famous due to Kramer painting, many people started talking about that and enquired about the current condition of that painting. Although no one has found the real painting till now, many believe that it is in some lodge in Connecticut. The famous Kramer painting disappeared right after making its memorable appearance in Seinfeld. Many fans also believe that it must have been stolen by some crew member during the show, but it has never been found since past more than 20 years.

Some people say that Seinfeld obtained special permission to highlight that painting in the show, but it is not yet clear where the painting disappeared after that show. Some fans still believe that secrets behind the mysterious disappearance of that painting will be opened and it will return.

Well, if you look at history, you will find many such incredible paintings whose artists are still unknown. Many original works are also available online on famous art galleries; you can check them on the internet to choose one of the best painting for your home. If you like famous art, but can’t afford orginal artwork, get an oil painting reproduction is a good alternative. Such painting reproductions can be hanged in the living room wall, study room, or in the office as well. Although many painters after 38th episode of Seinfeld recreated that Kramer painting using different methods; but people are still in search of the original one.