The Avenue in the Rain is a 1917 oil painting by American artist Childe Hassam. It depicts a rainy Manhattan streetscape and US flags. The painting is part of the Flag Series, which features patriotic works by Hassam before the first world war. The Avenue in the Rain was once in the Oval Office of the U.S. president, John F. Kennedy, and has since graced the walls of numerous other presidents, including Bill Clinton, Barack Obama, and Donald Trump.

This painting is one of his most famous works, and has been exhibited at the National Gallery of Art in Washington, D.C. During his lifetime, Childe Hassam exhibited his watercolors in New York, Paris, and London. After exhibiting his works in the 1880s, he dropped his first name and painted under the name Childe Hassam. He also added a crescent symbol to his signature, although its meaning is unclear. 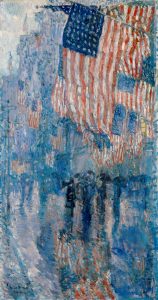 In addition to its beautiful colors, The Avenue in the Rain also contains historical context. It was painted at a time when patriotic fervor was rising in the US was about to declare war on Germany. Childe Hassam was born in Maine and had a family of New Englanders. His father, Frederick Hassam, was a moderately successful cutlery businessman. His father, Frederick Hassam, was of Middle Eastern origin and claimed descent from the 17th century English immigrant Horsham. The last name was eventually corrupted to Hassam. 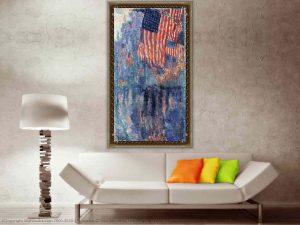