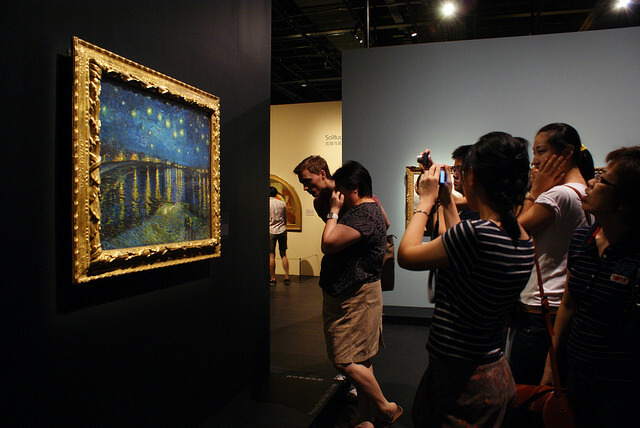 Starry Night over the Rhone by Van Gogh is one of the most famous paintings of modern times. It belongs to the series of nocturnal paintings by Van Gogh which depicts the locality of Arles in France. He painted it on the banks of the Rhone River. The use of the blue and yellow colors is typical of Van Gogh. Starry Night over the Rhone was painted in 1888 and is now restored in the Musee de’Orsay in France. This painting with its vibrant colors of the Night has become a part of popular culture. It can be seen hung at houses, painted on the cover of mobile phones, computers, diaries, journals and so on! 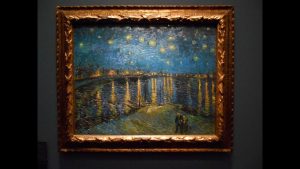 Table of Contents hide
1 What Does The Painting Show?
2 Impressionism
3 Artistic Value

What Does The Painting Show?

The scene that unfolds in the painting is as if painted from the point of view of the painter who is perhaps sitting with his easel at the river bank. Experts comment that they are looking at the south east of the Rhone River from Lamartine. The painting shows the jagged, edgy brush strokes which were characteristic of Gogh’s paintings. The blue and the yellow mingle with one another in the most beautiful way. It is a serene depiction of a night scene where the stars are like luminescent, yellow fire crackers in the sky. There are some boats which are anchored to the shore and there is an old couple taking a walk. They reside at the edge of the painting and are facing the viewers.

Although Van Gogh is considered to be a post-impressionistic painter, there is a trace of impressionism in his painting. The nocturnal scene that he painted is hardly realistic in its details. We all know stars cannot be seen as those yellow firecracker-like sources of light. The scene is rather the representation of the impression that the night scene casts on the painter’s mind. It is the impression of the night scene on painter’s mind that creates a mix of watery blue and yellow on the easel. There is a certain abstract quality to the painting. Gogh himself talks about the colors that he uses in the painting – aquamarine for the sky, royal blue for water, mauve for the ground, blue and purple for the vista of the town that can be briefly seen. On the sky, there is the Great Bear constellation. The colorful figures, he writes to his brother Theo, are of two lovers.

Color is of utmost importance in Gogh’s paintings. The brush strokes are jagged and dynamic. The color blue is so prominent that everything submerges in that color. This painting has become a representative painting for Modernist art. Many painters have tried to copy it, reformulate it and use parts of the painting to make graphic designs and so on. The painting is so moving, so profound that Don Mclean wrote a song about it even! Its artistic value is so high that even the digital prints of this painting are sold on high price these days!