Spanish painter, writer, born in Figueres in the Spanish provence of Catalonia. Salvador Dalí was educated at the School of Fine Arts in Madrid. He is known as a leading force in the surrealist movement.

Dali had come to the attention of the surrealists after he wrote the screenplay for Buñuel's film ‘Un Chien Andalou' in 1928. He went on to meet Picasso and French poet Andre Breton while in Paris around 1929. The year 1929 was also marked by his meeting with Gala Eluard, the wife of the French poet Paul Eluard. They would eventually marry. She would provide Dali with strong support in his life, guiding him financially and his art. 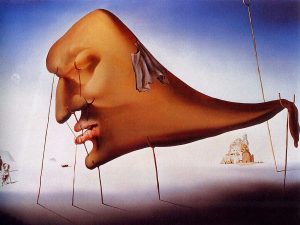 Because of Gala's assistance, Dali would became recognized as a notable painter in Paris. During the 1930's his paintings were exhibited in surrealist shows in most major European cities and also in the United States. Dali would soon start to produce some of his most famous early works including ‘The Persistence Of Memory' (1931), The Lugubrious Game (1929), and ‘Surrealist Objects, Gauges of Instantaneous Memory' (1932). About this time the other leaders in the surrealist movement, however, would soon start to shun him because they felt his work was too commercial, and because of political differences with Dali's rightest views. 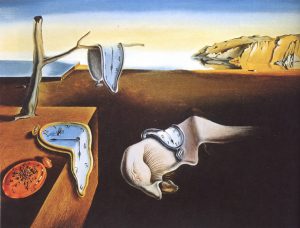 Dali would eventually be expelled from the official surrealist group in 1934. In 1940 Dalí and Gala fled France, just before the country fell to the Nazi invasion. They arrived in the United States and would remain there until 1948 before returning to France. Upon their return Dali began to embrace more traditional and universalist themes in his art. To become more “classic”. During their years in the United States, Gala persuaded Dalí that even greater heights were possible for him. During the 1950's Dalí developed an eclectic combination of all of the artistic and philosophical influences of his life. These would also include both science and religion. These would all be brought together for form his principles of Nuclear Mysticism. 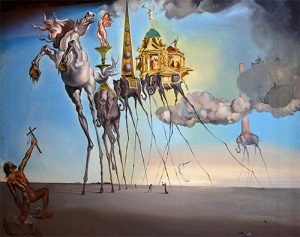 He reasoned that science could be used to explain the nature of reality. He also thought that the very existance of life would prove to be as a spiral. In 1953 scientists prove out his concept when they would discover the double helix strand nature of the DNA molecule. This would be illustrated by the painting, ‘Nature Morte Vivante' (Still Life- Fast Moving). His paintings during this period his painting were often on religious themes, and classical in style. They include ‘Crucifixion' (1954), and ‘The Sacrament of the Last Supper' (1955). Dali's legacy would be his creation of a new art movement that was also his unique style. He was known not only for his art but also for his work in jewelry design, film production and writing. Still it is his paintings and graphic works provide the basis for his greatness and mystifying genius. Salvador Dali died January 23, 1989. There are two museums dedicated to displaying his works. The Salvador Dali Museum in Florida and Theatre Museo Dali in Spain.