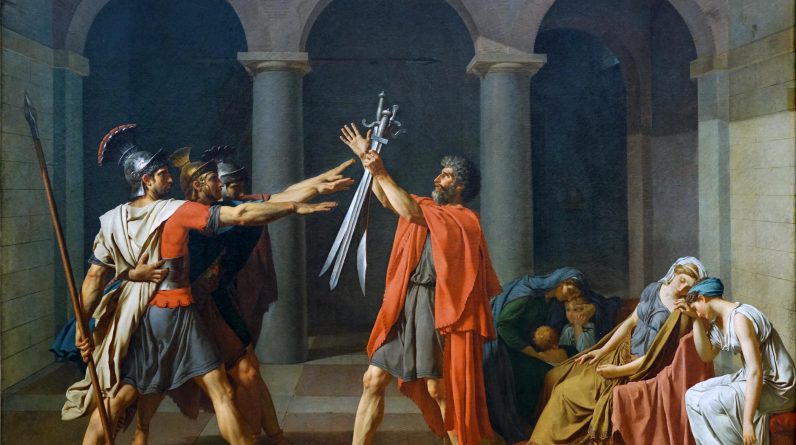 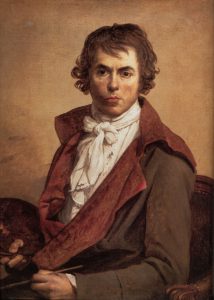 What Does the Painting Depict?

The time that the painting depicts is 7th century. The theme is the dispute between the two cities of Italy – Rome and Alba Longa, although the combat is going on between two families of the cities. The story behind the painting is of three brothers on each side fighting against each other. The three Horatii brothers of Rome are going to fight the three Curiatii brothers of Alba Longa. In the painting, the moment before the fight is captured. The three Horiatii brothers are taking an oath by raising the sword towards their father. In distance, the women of the family are seen to be mourning the fact that the men in their family are going to war. 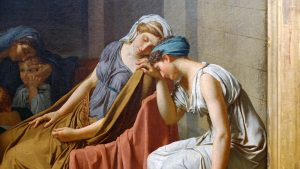 What Does the Painting symbolize?

The painting is emblematic of the classical Roman patriotism. Here, these three brothers symbolize the great city of Rome and the masculine ideals it upholds. They, on the behalf of the city, is about to fight the Curiatii brothers who are going to fight on the behalf of their city Alba Longa. They are taking an oath and announcing their valor. While they are anticipating the glory they would bring for their city, the women are crying because they fear bloodshed. One of the women who is sister to the Horatii brothers are betrothed to the Curiatii brothers. Her pain is allthemore because of the conflict because of the loss she might suffer on either side.

The Value of the Painting

The painting has both artistically and historically valuable. Not only does it depict a very crucial scene, but the psychological aspect of the painting is also noteworthy. The painting shows the glory of sacrificing oneself for the country as well as the loss and devastation of the war. The two sexes display two different kinds of emotion. Whereas the men are vibrating with energy, the women are weeping. The emotional and psychological contrast makes the painting so great. The use of bright colors such as red brown yellow and blue is the typical palette of the classical period which the neo classical painters revived.

Paintings such as these kept anywhere transform that place beyond modern times. The moment you look at the painting, you are bound to be transported in the far away and the long ago. Not to mention, this painting represents one of the most crucial period of art history and the painter belongs to one of the most coveted schools of painters – the French school.