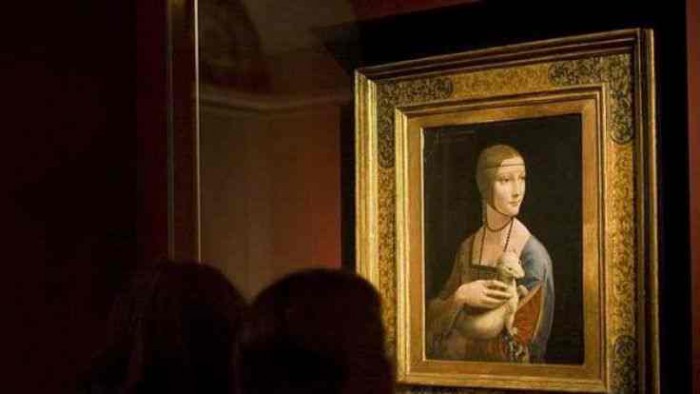 “Lady with an Ermine by Leonardo da Vici” is one of the most famous paintings in history. It is a portrait of a woman with ermine fur, painted in oil on a walnut wood panel. This painting has been attributed to Leonardo da Vinci, but there is some controversy about its true authorship. In this article, we’ll explore the ermine’s significance in the painting, its meaning as a symbol of chastity, and the relationship between the man and the animal in Leonardo da Vinci’s work.

Lady with an Ermine

The picture depicts a pregnant woman, Cecilia Gallerani, with a stoat on her hip. The ermine’s head is merged with the lady’s decollete, which suggests a breast bared for nursing. The ermine is bound by a golden section of the picture’s height. The central perpendicular is a dark red line that runs through the woman’s right eye. The ermine’s head is framed by drapery on the left sleeve, while her arms are covered by a white winter coat. 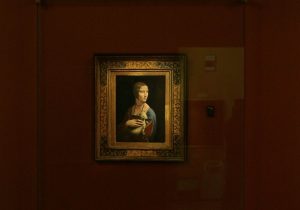 Three versions of the painting

The ermine is the central element of the painting. The animal has a long history as the guardian of pregnant women. Ludovico was given the nickname White Ermine two years prior. His name comes from the ancient Greek word gale, which means weasel. Because of this connection, Leonardo felt it was necessary to include the animal in the painting. 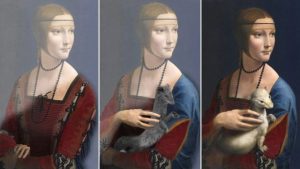 Meaning of the ermine as a symbol of chastity

The ermine is a symbol of purity and innocence. According to medieval bestiaries, ermines would rather die than soil themselves, indicating their value for moral purity. Their white coat, therefore, is considered to be sacred and unspoilt. Despite its white coat, the ermine has many other meanings. The ermine’s white coat is a powerful symbol of chastity. 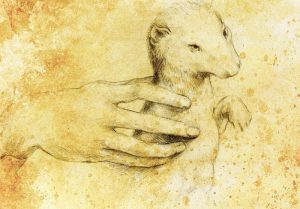 Symbolism of the ermine in Leonardo da Vinci’s painting

The ermine is a mascot of Ludovico’s family and is included in this portrait for several symbolic reasons. In Leonardo’s Codex H notebook, he wrote that the ermine stood for purity and moderation, and illustrated this motif in his paintings. The ermine drawing is found at the Fitzwilliam Museum in Cambridge. The ermine is a heraldic emblem for Ludovico il Moro, the Duke of Sforza and the founder of the Order of Ermine.

Relationship between man and animal in Leonardo da Vinci’s painting

Leonardo da Vinci was an expert in anatomy and studied animal dissections. His drawing of a bear is an example of this. Although his drawings are rarely fully described, he may have drawn it from life, and studied its anatomy through dissections. This sheet is related to a group of bear studies, which likely arose out of his planned anatomical treatise. The sheet also contains a faint outline of a seated woman, indicating re-use of the sheet.