The paintings of John William Waterhouse have been accepted by enthusiasts of all ages because of the blending of the realistic setting with the touches of fantasy. A thorough Romantic, he had set himself apart from his contemporaries by not escaping from the fact, but deriving its positive properties and inculcating them in situations that the common man was familiar with. As the primary subject of the paintings, Waterhouse depicted women as strong and raw beings unbothered by her surroundings and this theme has been rightfully communicated with the use of sharp and bright hues along with incessant symbolic and allegorical references.

The theme of feminine characteristics that we spoke about in the preceding section has qualified him as one among the group of Pre-Raphaelites. His paintings speak for themselves and the artist’s common tendency to fall back upon myths and legends as his subjects, particularly the ones which are tragic and yet draw peace and tranquility from the underlying pain itself. Waterhouse’s paintings did have men with strong built and dominating faces that wore the transparently brought forth their masculinity; but more often than not, their faces were either turned away or were found looking at the feminine body thus enhancing the female power and superiority. To endow his settings with a more natural and realistic look, he employed castles and open yards as the backdrop of his female characters; most of them are seen sporting a rugged look that on some level abides by the then-prevalent norms and equal deviations from it.

In this painting, we see the Spanish lady being martyred and her body lying on the bare snow. The lower part of her body is covered with a piece of cloth while the upper portion exposes the bruises that she has been subjected to. There is a sense of peace in that dead body as opposed to the restlessness depicted in the flock of birds and Christian people standing perpendicular to her. 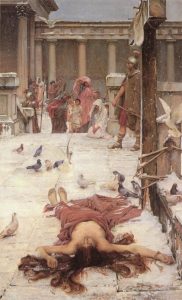 Another breathtaking reference from the Christian mythology, the scene where Circe allures Ulysses and tricks Ulysses is depicted with sheer brilliance. Here she is seen sitting on a platform that is raised above the ground level enhancing the power that she is exercising over others. The mirror has been strategically placed behind her to give it a form of a throne and Circe as the ruling Empress. 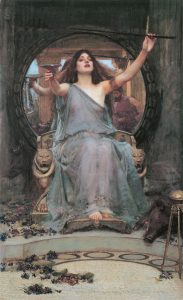 The Lady of Shalott

This particular painting outlines a lady donned in light-colored clothes on a boat looking keenly yet powerfully towards a direction with a hand-woven cloth lying before her. This painting is highly symbolic as it accounts for the life of the common Victorian ladies who had little or no scope of education and took a course to weave in their idle times. 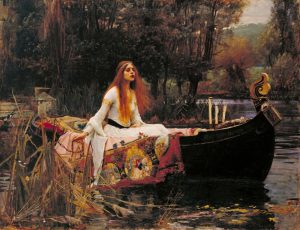 Reasons to own John Waterhouse’s paintings

Each of Waterhouse’s paintings comes with a strong message that is crucial in today’s world and that os women are creatures equal to men. When granted with enough opportunities in social life, they are bound to surpass all their limitations with glory and dignity. Women have been shown as the epitome of sacrifice, since the time that the world came into being, women have given up their ambitions and desire to fulfill the expectations of her family and society. In a scenario like this, these paintings will not only be relevant to be used in houses and offices but also at schools and assembly halls to make the common man familiar with the capabilities and the overwhelming grace of an unrestricted woman combined with the historical contexts of the preceding ages. Apart from being a stalwart of admiration, Waterhouse’s paintings emerge as a winner in putting forward the social and political notions that involve women.