We have heard the names of famous artists such as Caravaggio, Da Vinci, Michelangelo and many more. But the true fact is that many northern European also contributed to the history of art. One such incredible artist was Jan Van Eyck who is known for his revolutionizing portraiture, oil painting masterpieces, and Medieval work.

If we look at the history, Jan Van Eyck was born in 1395; almost by the end of Middle Ages. There is the least information about his early life, but some stories reveal that he took birth in the Flemish region in Belgium and spent most of the time of his adult life at the Netherlands. In those days, the Holy Roman Empire used to rule the area, and it was headed by Pope and some appointed emperor. The earliest artworks of Van Eyck were more related to the noble courts of John III, Duke of Bavaria. He used to supply plenty of ecclesiastical and secular works to the court from his art workshop.

When Duke died in 1425, Eyck also moved ahead and started providing his paintings to other prominent nobles such as Duke of Burgundy and Philip the Good; note that, they ruled most of the areas of Netherlands for many years. History reveals that Good and Philip both were greatly influenced by the artwork, and Eyck also completed some of the most famous paintings in that duration. Eyck also used to get commissions for painting portraits of the duke and other members around. He also painted them for Isabella of Portugal. Although Van Eyck’s career was short-lived as he died in 1441; but many of his paintings created history, and he is still remembered for his amazing masterpieces. After his death, his family carried his workshop for the long run, and they also published many stories about his life. 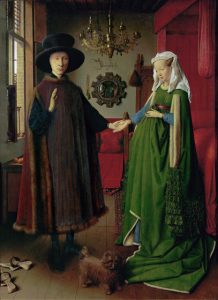 Jan Van Eyck became popular for his excellent portraiture; he painted some of the most influential people of his times. His portraits were more centered towards emotions and realism. One of his widely known religious piece of work was the Ghent Altarpiece. It was an 11×5 foot altarpiece that was designed using 12 wooden panels, and it displayed the awesome blend of mastery and realism. This panel shows God seated like Kind with the adoration of Christ and other people in the altarpiece were Baptist, John, Even, Adam and Virgin Mary. 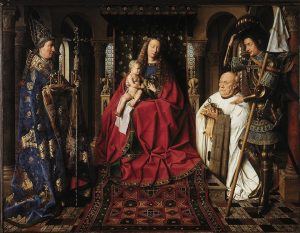 He expressed his talent and skills through expressions on his paintings, and they gave birth to the realistic portraiture. One famous portraiture of Van Eyck was Arnolfini Portrait in which he painted a wealthy Italian merchant with his wife. This painting shows extraordinary expressions with some key indicators that capture the attention of all viewers. This painting was loaded with symbolism while displaying the elements of faith, marriage, loyalty, and love.