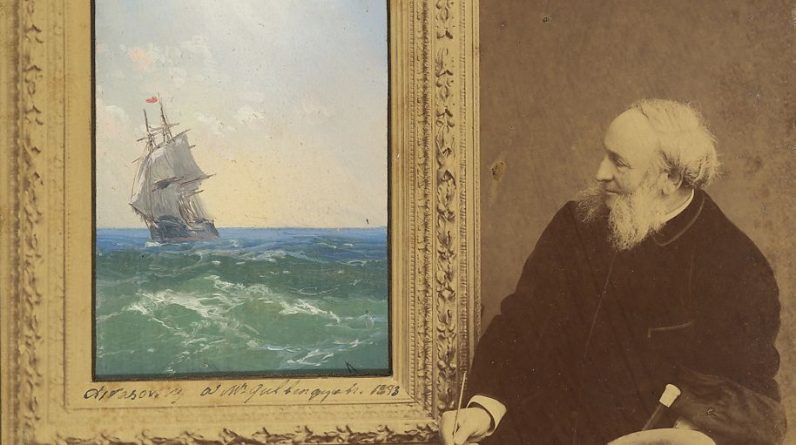 A 19th-century Russian painter, Ivan Aivazovsky has been celebrated for his works that demonstrate the marine life and its accompanying glories and miseries. Every bit of the paintings echoed majesty and gigantic grandeur; Romanticism could be traced in every shade displayed on the canvas. There are more than 6,000 paintings that have illustrated vessels, ships, sailors and other marine bodies that are subjected to the terrific turbulences common on the sea. Aivazovsky was strongly drawn towards the national pride of Russia and this facet is expressed in the dignity displayed in the ships and its controllers at the face of nature’s rage. The wilderness and raw sentiments propagated by the portraits touches the right chord in the heart of the spectators.

Table of Contents hide
1 Influential Ideas and Themes
2 Ivan Aivazovsky Most Famous Paintings
2.1 The Rainbow
2.2 The wave
2.3 The Ninth Wave
2.4 Chaos (The Creation)
2.5 Descent of Noah from Aarat
3 Why should you buy paintings by Ivan Aivazovsky?

The marine body that is represented in most of Aivazovsky’s paintings is the Black Sea that presents before the sailors a challenging scenario and all of them emerging victorious out of it. J.M Synge in his play ‘Riders to the Sea’ have used several pages to evolve his idea that nature and its temperaments are supreme; the sea especially, is the provider and the depriver, man is bound to explore the seascape and accept all the ordeals that it to offer. Some survived while most of them had to lose their lives. Similar are the ideas of Ivan Aivazovsky, but his portrayal has been compressed in a canvas of restricted dimensions. This is what distinguishes painting from other forms of art.

This painting followed the conventional theme where a ship is seen sinking in the violent waves of the sea and the troupe of sailors escaping in a boat looking over their vessel. The shades used were dull and pale to reinforce the sense of the tragic resignation of man before nature. 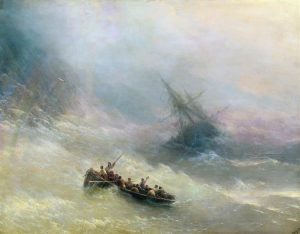 Can be hailed as one of the best works of the painter; ‘The Wave’ has ‘Black Sea’ as its predecessor. The theme portrayed in this slightly differs from his usual works because like the changing world that can be seen as a relentless march towards death, the painting too signifies the end of hope through the dark clouded sky symbolizing that its fury is not going to end sooner and the sea growling and consuming a ship with unending forces. 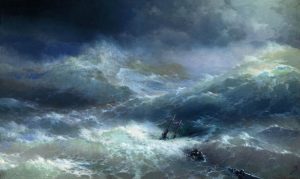 A true pioneer of Christian influences, ‘The Ninth Wave’ explicitly displays the Cross on the sea. Here we see a group of the sea trying to dodge the violent waves of the sea yet there is a ray of hope derived from the bright golden rays of the sun symbolizing that better days always lie ahead of the miserable ones. 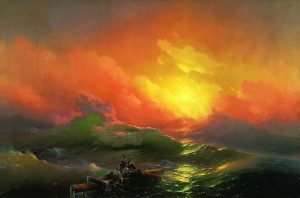 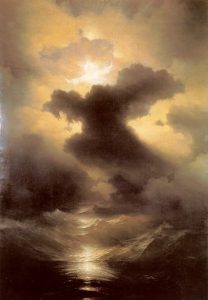 Descent of Noah from Aarat 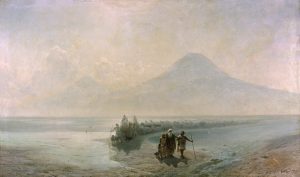 Why should you buy paintings by Ivan Aivazovsky?

The indefinite water body represented by the sea has always been a subject of fascination for art enthusiasts; time and again they have considered the sea to be the fore bringers of happiness and the source of indomitable energy and passion. Metaphorically, the sea with its alternative calm and wild waves stands as the symbol of man’s soul that is never quiet; there is always a battle of conscience and desires taking place in every corner of our minds and hearts and these paintings of Ivan Aviazovsky voice these exact passions. When you are surrounded by portraits like these, evoking deep passions and zeal for renewed ways in your everyday life is inevitable. Moreover, ship paintings are known as the carriers of abundance and prosperity in households according to the theorems Feng-Shui providing you with yet another strong reason to get one for your house immediately.

If you want to get a museum quality oil painting reproduction of Ivan Aivazovsky painting, Outpost Art is my No.1 recommended site. Their price is half of their competitors. And they have 100% satisfaction and money back guarantee.