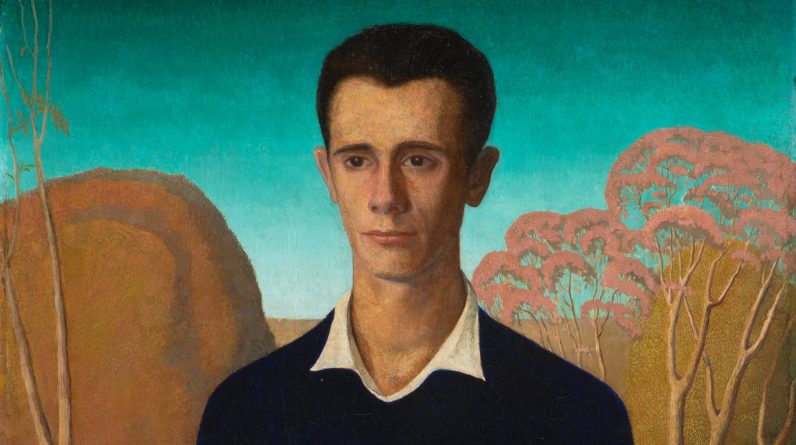 In the world of art, there are very artists who have been true to their native lands and wanted to uphold the real picture of his times and Grant Wood falls under this category of the minority. He had devoted his mind and soul to the depiction of the rural and countryside image of togetherness and community feelings and deliberately romanticized these notions. Grant Wood has been categorized as a painter in the American Regionalism and Social Realism movement; unlike his contemporaries, he did not fly away from the corporeality, instead he lived there, nourished in every facet that his motherland had to offer and produced them in his painting thus imbibing a touch of rustic habits and simplicity in everything that his canvas captured.

As we have already mentioned Wood’s tendency to take resort to a subject that has not been the concern of many, his style of presenting them too were unique and out-of-the-box. If analyzed carefully, most of the paintings used one primary color or the hues equivalent to it and the other objects were presented in a color complementary to this one. Furthermore, there was a touch symmetry in all the structures, be it the human face or a road leading to the mountains. Such keen elements that evoked mystery into the painting were the ruling tendencies of Grant’s artwork and this has successfully placed him as a master of the movements that he was a part of.

Hailed as one of the best artworks of the 20thCentury, here we see a bald man in a deep blue coat with a pitchfork in one hand and staring straight through the picture while the woman beside her is looking at him. They have a Christian house in the backdrop and have been carefully placed between the two heads which is a copious feature in Carpenter Gothic culture. 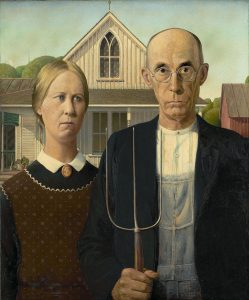 Another masterstroke of Grant Wood, in the portrait there is a lean old lady dressed in a black long dress with a ribbon choker around her neck. There is a telephone placed beside her and that is the primary object that conveys the emotion of the picture; the way the woman is painted shows that her emotions will not go beyond the frame that she is restricted to the outer world and the telephone is the fore bringer of news and messages from the world beyond and these two objects can never exist harmoniously. 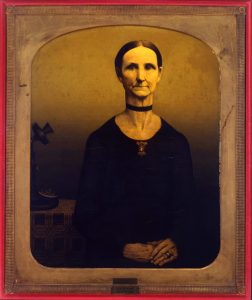 This painting has been typically designed according to the style of typical countryside scene; the scenery is dipped in clear sunlight and the sky is clear. There is a man employed in planting near the houses, a woman arranging clothes outside her house and a child indulging in tearing off flowers from a plant. 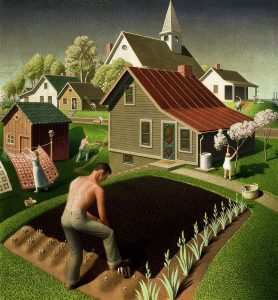 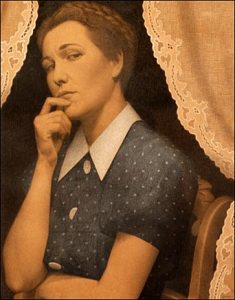 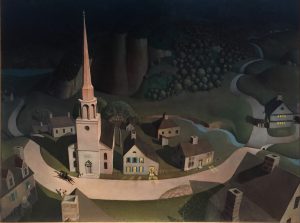 Reasons to own some of Grant Wood’s work

Grant Wood’s work proves that the rich culture and qualities that can be intrigued by a painting is unmatched and will live through all ages only growing in its popularity. Paintings that echo aesthetic value and invokes enigma through every brushstroke have the quality to leave the viewers wanting more. Hanging a painting of this caliber will aid at heightening the overall appeal of the apartment and never lose its factor of delight. Also as a member of the Regionalist movement, his paintings have created a world that is the closest to the human heart; a world that has not been touched by the modern advancements and is close to nature and its bounties. Furthermore, Wood presented an idealized picture of America during the Great Depression reminding spectators that however difficult the times are, there will always be a source of solace. Therefore, when the architecture of the house is modern and influenced by the latest technologies, to have something that speaks of a country’s rich cultural heritage and pays equal attention to every corner of it, there will be a perfect balance created; the harmony between the traditional and the contemporary.