This painting by Edouard Manet depicts a woman serving a customer. She’s surrounded by a large mirror that reflects her exchange. The mirror reflects the man and woman in the painting, and the woman is dressed as a barmaid. Manet deliberately changed the composition and figure of the woman to make the painting more appealing to viewers.

Suzon worked at the Folies-Bergere and posed for the painting in Manet’s studio. Manet combined Suzon’s image with a series of rapid sketches from the Folies-Bergre. However, critics pointed out the inconsistency between the mirror and the real world. In reality, the man in the top hat would be facing the viewer, but Suzon would be reflected in a different location.

The subject matter of Style at the Folies-Bergre is very popular, with its depiction of a crowded bar and men in full dress. The subject matter is a mix of people, and the artist has captured the interplay between the various perceptions in his oil paintings. In this way, his subjects seem to be right in front of you. The complexity of social behavior is vividly depicted in the painting, and the artist’s study of the works of art has influenced him greatly.

The style of painting A Bar at the Folies Berger by douard Manet is a mix of realism and impressionism. In this example, Manet’s brushstrokes are bold and expressive, conveying the sense of an urban society. He pays special attention to the details of the interior, such as the bottles of alcohol. On the left, a red triangle is engraved, indicating that it is Bass Pale Ale, a popular beer in Paris.

The colours used in the painting are dominated by blue-blacks, cool blue-purples, and muted reds. The blue-black dress of the barmaid is particularly striking, with gold highlights in the hair. The painting is expressive, but still loosely handled. Repeating colours help to sharply define the foreground elements and create harmony throughout the entire composition. 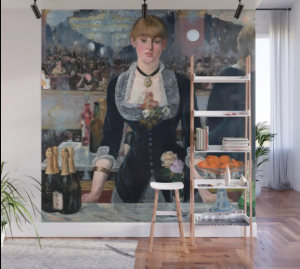